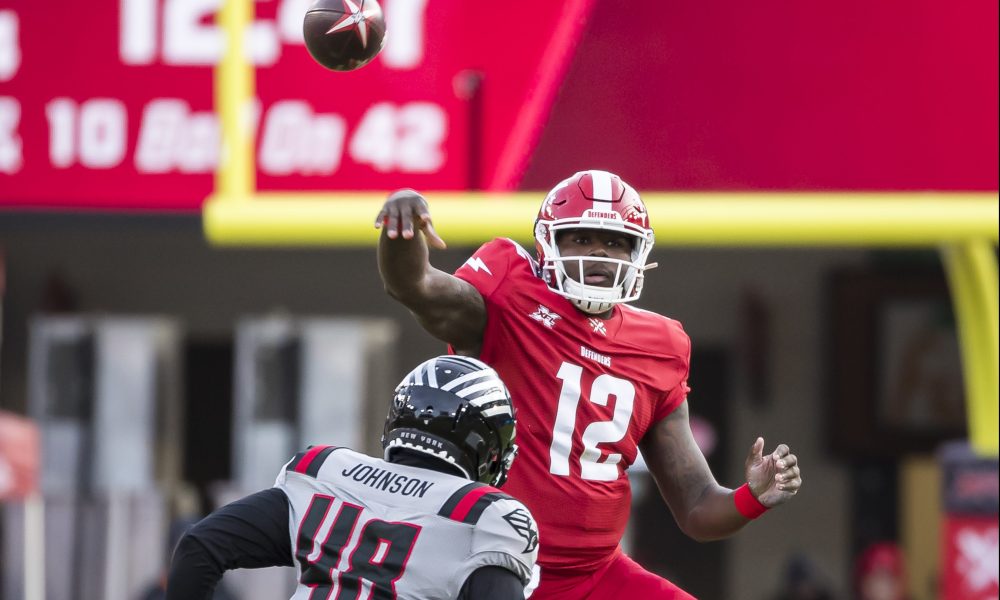 There’s a common theme this week: either pay up for the overvalued favorite or hold your nose and take the points. For XFL week 3 bets, we’ll be looking to find where the market is overreacting to the still tiny sample size we have of just two games for each of these teams.

After being nearly double-digit dogs the past two weeks, the St. Louis BattleHawks are now 10-point favorites hosting the New York Guardians. Yes, the Guardians were awful last week. After looking strong in week one, New York QB Matt McGloin was abysmal in week two against the DC Defenders.

But the Defenders have started to solidify themselves as one of the best teams in the league, with a cohesive and high-flying defense. So maybe we can cut New York just a little slack.

As far as DC’s offense goes, I wanted to fade QB Cardale Jones going into this XFL season because I thought he was getting a little too much credit based on name value. But he leads the league in passing with 511 yards and showed adept accuracy on his deep ball multiple times in week two.

But should DC really be as high as 9-point favorites against a Los Angeles team that arguably has a better QB in Josh Johnson? I expect Johnson to improve on his week one performance, but it’s hard to trust Wildcats in this game. They’re now 0-2 and have failed to cover in either game. This is the kind of spot where it may be smart to play contrarian and bet on the team that no one wants to take, but this LA defense might not be capable of keeping the game close.

The Wildcats fired their defensive coordinator after a 37-17 week one loss. But the results were even worse in week two. LA allowed 444 total yards to the Dallas Renegades, as both RB Cameron Artis Payne and QB Landry Jones has strong performances. Payne ran for 99 yards on 14 carries, good for 7.1 yards per tote. Jones was making his first start of the season and comfortably completed 28 of 40 passes for 305 yards with 1 TD and 2 INT.

The two interceptions are obviously not what you want to see, but LA wasn’t able to take advantage. Running back Elijah Hood ran for just 31 yards on 10 carries and while Josh Johnson threw 2 TD to 0 INT, he completed just 53% of his passes. Johnson’s 18 of 34 for 196 was good for a paltry 5.8 yards per attempt.

The bright spot of the Los Angeles offense is wide receiver, Nelson Spruce. Spruce leads the league in receiving yards with 192 after shining in the ill-fated AAF last year. Those numbers were put up with two different quarterbacks, so Spruce has shown an ability to get open and produce big plays through two weeks. With another week to get on the same page as Josh Johnson, we may continue to see him excel.

DC was fortunate to get the cover in week one hosting the Seattle Dragons. They won by 12 points, but 12 points came from D/ST touchdowns. They were also aided by a Dragons fumble at the DC five-yard line. The DC defense deserves credit for making New York look so bad on offense last week, but they’ll be stepping up in competition against LA.

Ultimately, this game is a dog or pass for me. It’s either time to buy low on LA, and sell high on DC, or just avoid this game altogether. This spread had gone up to LA +9 in certain areas, but it’s dipped back down to +8 or +8.5. That’s probably enough points for me place a wager on the Wildcats.

St. Louis has been steamed all the way up to -10 points, which makes it hard to lay the points even against this New York offense. New York won its first game with some fortunate turnover luck. And for as good as McGloin looked in that game, he looked far worse last week at DC. The true McGloin is likely somewhere in between, but I’m not eager to back him against what looks to be a quality St. Louis team.

The BattleHawks were close to 10-point underdogs in week one at Dallas and they came away with the outright win 15-9. Now, to be fair, that Dallas team didn’t have Landry Jones playing at quarterback, and the paltry 15 points by the BattleHawks is nothing to be impressed with. But however you slice it, St. Louis exceeded expectations. St. Louis was once again a big underdog at Houston and played the Roughnecks close, losing 28-24 but covering the spread.

This line at St. Louis -10 is an overreaction to the BattleHawks exceeding expectations in their first two games. They may blow out New York, but it’s hard to believe that these two teams are 10-points apart in talent. I’ll likely be staying away from this game completely.

Going into this XFL season I figured that home-field advantage would be close to non-existent. But that was before I realized Seattle was going to play at CenturyLink Field, the home of the Seahawks. Seattle fans came hungry for football too, and the attendance of 29,172, by far the biggest crowd for an XFL game yet.

So it’s at least intriguing to think about Seattle as a 5-point home underdog in this game. Landry Jones did look solid for Dallas in week one, and Brandon Silvers again looked terrible at quarterback for the Dragons. But he did redeem himself enough in the second half with one big play, a 68-yard bomb to former Navy QB Keenan Reynolds for a touchdown.

I don’t see any value in taking Dallas at -5 or -4.5. But it’s also not high enough to really want to throw down on Seattle. I’d like to wait and see if this line can creep closer to +6 on Seattle before I think about taking the home underdog.

The Tampa Bay Vipers were expected to be one of, if not the strongest team in the league heading into the season. But with the terrible play by QB Aaron Murray in week one, combined with the ineptitude of their head coach Marc Trestman, it’s hard to have any confidence in this team.

The market has also lost all faith in Tampa Bay. After two weeks of listing them as short road favorites, the Vipers are catching close to a full +7 points for the first XFL game of the weekend. This spread takes into account just how bad Tampa has looked, as wel las how good Houston and QB PJ Walker have looked through two weeks.

But looking at the box score of Houston’s game last week hosting St. Louis reveals some causes for concern. While PJ Walker threw for 3 touchdowns, he passed for just 170 yards at 5.48 Y/PA. Houston was thoroughly outgained on offense last week, losing the yardage battle 238 to 390 in favor of St. Louis. They were just 2-10 on third down and allowed St. Louis to complete 11of 19 third-down attempts. They also allowed St. Louis to complete 3 of 4 4th downs.

Now that this game has hit Tampa Bay +7, I have no choice. It’s not fun but this is another game where I have to take the unsightly underdog or just not bet it at all. Tampa Bay cannot be as bad as they’ve shown so far. And you probably can’t be buying much lower on TB or selling much higher on Houston.

For more betting analysis, head over to our Free Picks page.