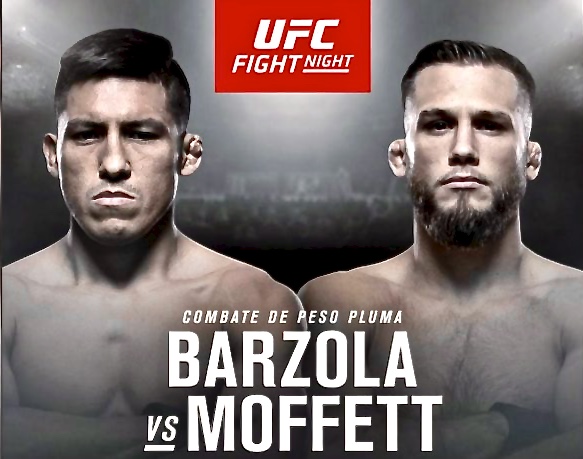 Who Has the Advantage?

Enrique Barzola (15-4-1) who fights out of Peru takes on Bobby Moffett (14-4) who represents the United States. Both fighters are coming off losses and look to rebound Saturday in Uruguay at UFC on ESPN+ 14. For Barzola this will be his eighth UFC fight and sports a (5-2) record inside the organization.  Moffett on the other end is only (1-1) but also has a win on Dana White’s Tuesday Night Contender Series.  Barzola is thirty years old and has a 70-inch reach and Moffett is twenty-nine years old with a 74-inch reach.  Moffett will be the bigger fighter with the reach advantage.  Barzola will have an advantage in terms of travel and home country advantage.

Enrique is a South American fighter and had a short from Peru to Uruguay (4 hr. and 35 min. flight).  Moffett had a much longer travel time and has to deal with fighting in a different country for the first time.  I think Barzola is the better striker and has more endurance and cardio than his opponent. Barzola trains out of American Top Team in Florida but spent time this camp training at American Kickboxing Academy. That’s the same gym where champions Daniel Cormier and Khabib Nurmagomedov train out of in San Jose, California.  Both gyms are world-class and the advantages go to Barzola in terms of gym and training quality when comparing each fighter.  The South American has a good ground game and I think can maintain enough top control to outwork Moffett for three rounds.

At odds of -130 that gives Barzola and implied probability of 56.5%. He’s the more experienced fighter with better striking and cardio plus Barzola fighting close to home is an advantage if this match goes to the scorecards.  I would list the favorite at odds of around -190 which is where it opened at.  I give Barzola a 60%-65% chance to win this fight Saturday night.  After the line move, I think we have value now on Barzola and I bet him at -130.  I think it’s a bet worth taking.

Make sure to stay updated to our Free Picks page for more betting picks.