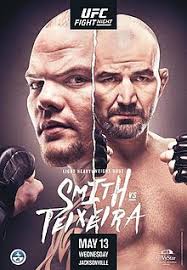 With the return of UFC last weekend, we are back to betting on more traditional sports as opposed to Russian table tennis and Korean baseball. UFC Fight Night: Smith vs Teixeira will take place on the night of Wednesday, May 13th. Our free pick in this event will come from the main event itself.

American Anthony Smith (33-14) will take on Brazilian Glover Teixeira (30-7) in a Light Heavyweight bout among two top 10 fighters in their division.

Smith is coming off of a surprising upset victory over Alexander Gustafsson back in June of 2019. In an impressive fight, Smith got Gustafsson to tap in the fourth round with a rear-naked choke.

Teixeira is coming off of a victory against Nikita Krylov back in September of last year. Teixeira managed to pull out a split decision victory in a fight that surely could have gone either way.

Teixeira is on a three-fight winning streak, including back-to-back submission victories prior to his win against Krylov. The 40-year old has been able to win fights by any means throughout his entire career. In his 30 career victories, Teixeira has 17 wins by knockout and eight by submission, showing he is capable of battling both standing and on the mat. He is tied for the most stoppage victories in the UFC Light Heavyweight division with 10, and also tied for the most submission victories in the division with five.

After fighting as a Middleweight most of his career, Smith will be making just his fifth bout as a Light Heavyweight. He will be taking on yet another aging veteran in the division (wins against Rashad Evans and Mauricio Rua). After losing to Jon Jones back in March of 2019, Smith is looking to climb back to the top of the ranks in the Light Heavyweight division. However, Teixeira is not an opponent for him to overlook.

Smith may have the age and a slight one-inch reach advantage but Teixeira is a well-balanced fighter that provides problems that Smith didn’t see against Gustaffson (who is just 2-4 in his last six fights). Teixeira has never been submitted in his career while Smith has been submitted four times. He has also been knocked out eight times in his fighting career compared to just three times for Teixeira.

An experienced fighter capable of winning a fight in any aspect, Teixeira will be able to throw a nice combination game at Smith. This is likely the last chance Teixeira will have to try and climb up to the upper echelon of his division. Smith is riding high on his upset win over Gustaffson and may be looking down on an aging Teixeira.

Smith will look to keep this fight standing and Teixeira will be content with that. However, look for Glover to try and take this fight to the mat numerous times where he has a clear advantage. Even if he can’t manage to take this fight to the ground, he certainly has the ability to end this fight with his fists. Smith doesn’t have the toughest jaw in the UFC so while he may have the slight advantage standing, Teixeira is likely to absorb more damage than Smith.

This is an excellent plus money spot here for Teixeira, a fighter who is looking to make one final push near the end of his career.