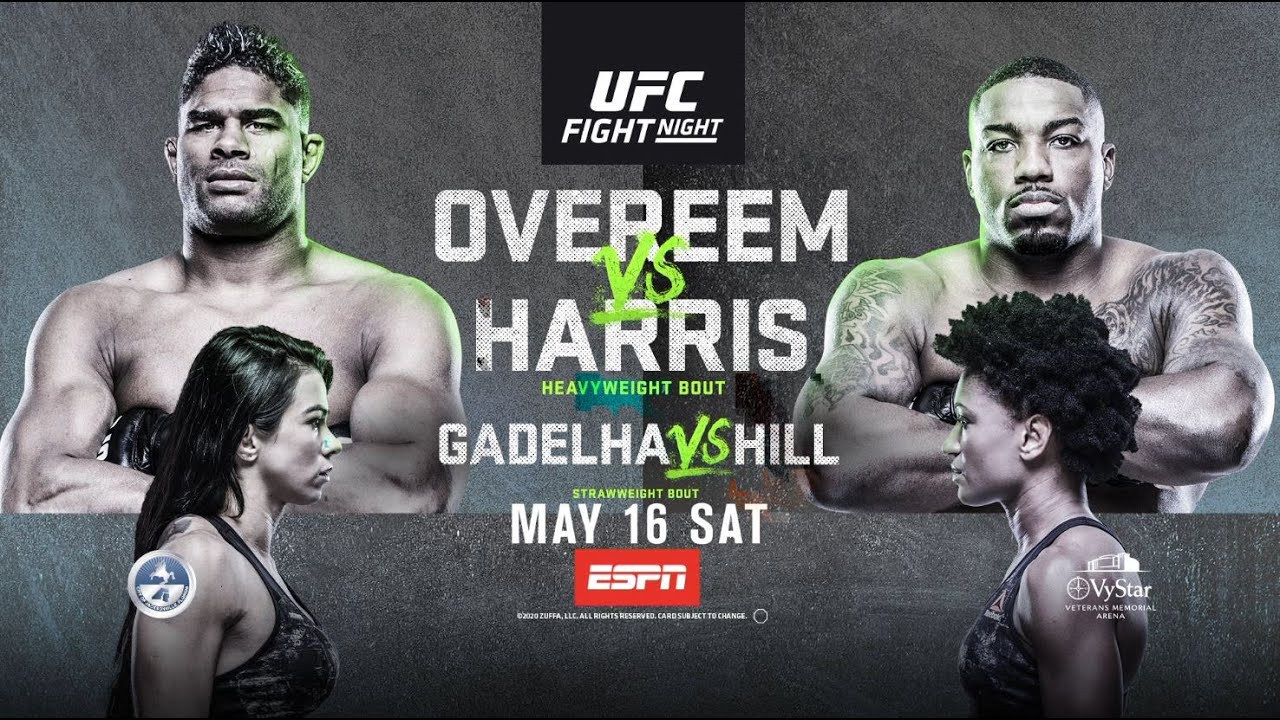 In the third UFC event in eight days, UFC Fight Night: Overeem vs Harris is set for Saturday, May 15th. This will be the last UFC event until May 30th. This card features some excellent fighters, particularly on the main card. All leading up to a heavyweight bout between two heavy hitters.

This will be a Featherweight bout between two fighters who are on some big winning streaks. Song Yadong is 4-0-1 in his five UFC fights after a draw against Cody Staman. Marlon Vera has won his last five bouts, three by knockout and two by submission.

Both fighters were the favorites in their last five bouts but Yadong enters this fight as a -180 favorite in most books. Vera has the size advantage in both height and reach. This should be an excellent fight between two solid fighters in what could be Fight of the Night.

After losing three out of four fights, Anders has responded with back-to-back wins in his last two fights. His opponent, Krzysztof Jotko, was on a five-fight winning streak and then quickly lost his next three bouts. Now, he is also on a two-fight win streak.

This Middleweight bout has Jotko as the -140 favorite and that is the right decision as he is the better all-around fighter in this contest. Jotko is three years younger with a two-inch reach advantage. This fight may go the distance but Jotko should see his hand raised when this one is over.

Edson Barboza has been in the UFC for quite some time. He has fought some of the best the UFC has had to offer in Tony Ferguson, Cowboy Cerrone, Khabib, Justin Gaethje and Paul Felder. However, he lost to all of those big name guys and has lost four of his last five.

Dan Ige isn’t one of the UFC’s best fighters, yet. His only UFC loss was a decision back in January 2018. He is 6-1 in the UFC, winning his last five. He is coming off of just a 97 day rest period since his last fight. Barboza has the experience but his lack of will may be an issue. Looking to walk away from the UFC in recent months, Barboza may not have the hunger that an up and comer like Ige has. This could be a great plus money spot for Ige bettors.

Claudie Gadelha is another Brazilian fighter who has been around for awhile. She has some blemishes on her record but the losses have been to some excellent fighters (Joanna Jędrzejczyk twice and Jessica Andrade) all by decision. In fact, only one of her UFC fights hasn’t gone the distance and that was a submission victory back in 2017.

Angela Hill has logged 16 fights since December of 2014 and the majority of her losses have also been against some big name fighters (Andrade, Tecia Torres and Rose Namajunas). She has won her last three bouts, two by knockout.

This should be an excellent back and forth battle with Hill a nice option at +190. This fight will likely go the distance unless Hill can find some knockout power.

Alistair Overeem was on the wrong side of one of the biggest punches in UFC history in his last bout when Jairzinho Rozenstruik tore his lip up to his nose with one punch at the end of the fifth round. However, the only people who have been able to take him down were some of the biggest punchers in UFC history (Rozenstruik, Francis Ngannou, Curtis Blaydes, Stipe Miocic and Ben Rothwell). Overeem has lost to some of the Heavyweights best fighters and is still a force to be reckoned with on his own.

Walt Harris is on a four-fight win streak at the moment. Early in his career he struggled against some not so great competition. However, he has knocked out three of his last four opponents, including a solid veteran in Aleksei Oleinik in his last bout.

Overeem has the three-inch reach advantage and is a surprise underdog in this fight. He may be 39 but Harris himself is 36. Overeem has lost to some of the best in UFC history while Harris hasn’t had too much difficulty in his fighting schedule. Don’t let Rozenstruik’s vicious knockout scare you. Overeem is still a legit fighter. This will likely be a brawl, but Overeem at plus money is too good to pass up in this spot.