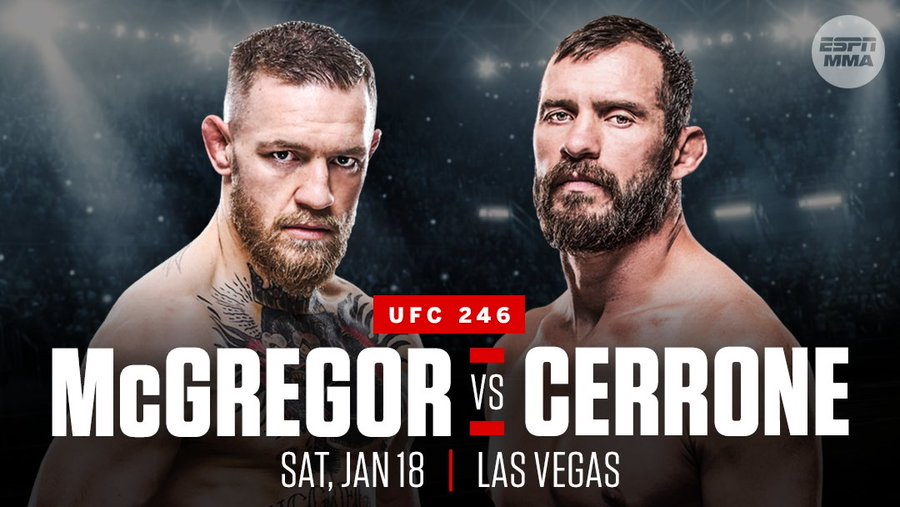 The first main UFC event of the 2020 year takes place tonight, January 18th. UFC 246 features a solid card from top to bottom that will end with a main event fight between Connor McGregor and Donald “Cowboy” Cerrone. Will the long-awaited return of McGregor live up to the hype or will the main event be overshadowed by a better fight earlier on? Let’s take a look at some of the biggest fights of the night.

In this 155 lb bout, Pettis is the household name here. Even novice UFC fans have heard of “Showtime” and his flashy fighting style. A simple Youtube search and you will see some of Pettis’ best moves, including a superman punch knockout of Stephen Thompson or his off the cage ninja kick. Despite these flashy moves, there is a reason Pettis is nearly a +200 underdog in this fight. Pettis hasn’t won back-to-back fights over the span of his last 11 fights (more than five years). The 32-year old has bounced around weight classes but is back in his “comfort” zone in the lightweight division.

Ferreira is the elder fighter in this bout and despite his five-fight win streak, remains under the radar and unranked. While his competition may not have been the toughest, his knockouts in that five fight span were impressive. In order to get to Pettis, Ferreira will have to push the issue and his plan is to do just that.

Pettis struggles when the fight is being forced into him and that aspect alone is a big reason that Ferreira is such a heavy favorite. Ferreira is an inch shorter than Pettis but he has a one inch reach advantage over Showtime. Expect Ferreira to be the aggressor in this fight and take this one right to Pettis as a win here will finally put the Brazilian in the lightweight rankings.

Holly Holm, the woman who shocked the MMA world with a knockout of Ronda Rousey more than four years ago, returns to action after nearly 200 days since her last fight. In the co-main event, Holm will take on Raquel Pennington in a bantamweight bout. Since Holm’s amazing knockout of Rousey, she has quickly fallen off the map as she has gone just 2-5 since. Holm was knocked out by Amanda Nunes in the first round in her last fight.

Pennington is 5-2 in her last seven bouts with her two losses coming to Nunes and Germain de Randamie. She should match up well with Holm in this fight due to her toughness and ability to stand and fire punches. Pennington was only knocked out once in her UFC career and that was against Nunes, so there is zero shame there. Pennington may not have the knockout potential that Holm does but this is the type of fight she could out-punch Holm and get herself a decision victory.

These two met in Holm’s UFC-debut with Holm getting a split-decision victory. Holm was a -625 favorite in that fight and is now hovering around -120 in this fight. “The Preacher’s Daughter” is now 38 years old with Pennington coming into this fight just 31-years old. Holm has the slight height advantage and a 1.5-inch reach advantage. However, her being a small favorite in this fight shows that oddsmakers aren’t that confident in her ability to knock Pennington out. In this three-round fight, Pennington could outlast and out-punch an older Holm and pull the small upset as she continues her trek back up near the top of her division.

Four years ago this would have been a fight for the ages. Now, it is a matchup of two former fan-favorite fighters who are on the downslope of their careers. McGregor has spent more time in legal trouble than training the past few years as he has had just one MMA fight since late November 2016 (his loss to Khabib Nurmagomedov). For Cowboy, it has been quite the opposite. Cerrone has been overworking himself as he has had seven UFC bouts in less than two years, including four in 2019 alone. The aging 36-year old Cowboy has been knocked out in each of his last two fights.

McGregor has the advantage standing up while Cerrone benefits on the ground. Early in his career, McGregor was a joke on the ground. While he has somewhat improved, he still looks very uncomfortable when the fight gets taken to the ground. While Khabib made McGregor look foolish, it is hard to shame him for that since Khabib’s ground skills are the equivalent of Amanda Nunes’ dominance in the women’s game. It is unknown how much McGregor has improved on the ground since that fight, but it surely has had to be one of his main focuses leading up to this fight. Also, Cerrone is certainly no Khabib but he is still a threat to McGregor on the ground.

While Cerrone excels on the ground, he also likes to stand up and throw punches as much as any fighter in the game. This could be his biggest weakness in this fight, his own ego. If Cerrone can make this a ground and pound fight, he very well could pull the upset. However, standing and trying to take the Irishman down with his fists will almost certainly end in Cerrone getting knocked out. McGregor has the reach advantage and also the hitting power and accuracy advantage.

If Cerrone can land some well timed kicks and eventually take this fight to the ground, the advantage is his. Also, the longer the fight goes the more advantage Cowboy may have as McGregor’s conditioning is unknown. However, in order to extend this fight, Cerrone is going to have to withstand one of the best punchers in UFC history. After two-straight knockout losses, can Cerrone survive the tactical and powerful fighter that McGregor is? The answer is more than likely no. McGregor is about a -300 favorite and that may be a little high considering his long absence. While a flyer on Cerrone at +270 isn’t the worst bet in the world, a bet on McGregor to win via knockout is probably the best bet here. If McGregor is going to win, you can almost be certain it will be a knockout.