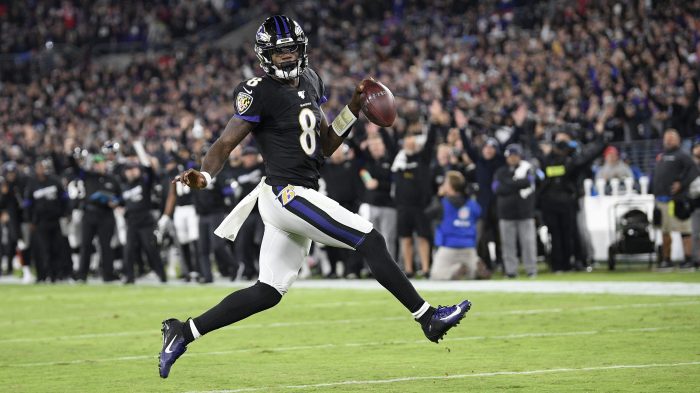 Let’s get this out of the way first. No, we did not go to 4-0 on teasers thanks to what should have been an illegal hit on Carson Wentz. Despite Wentz throwing just four passes, the Eagles were still in a position to cover the teaser. But they went for a fourth and long when they could have kicked a field goal that would have given us the win. And they had another shot at the end of the game inside the red zone. But regardless of our bad luck on that pick, the NFL Divisional Weekend teaser is going to start a new streak.

One of the tenants of teasers is to look to play on home teams. You can read more about teasers at our Betting Basics page. So, for this play, we’re going to stick with two home teams. And while it may seem obvious to play on the 49ers bringing the -7 down through key numbers to -1, that’s not where we’re going. We’re also going to do something different here and play a 7-point teaser, rather than 6 points.

I don’t need to tell you how good the Ravens offense is. They are clearly the best in the league and nearly impossible to defend. The Titans, meanwhile, are squarely average on defense. They rank 16th in defensive efficiency and are 21st against the pass. While Tennessee does rank 10th against the run, the Ravens do not have a conventional running game.

On defense, the Ravens rank 4th in overall efficiency and are 4th against the pass. This game should play out a lot like the Titans game last week against the Patriots. Do not expect Ryan Tannehill to light up the scoreboard. And even if Derrick Henry goes off, the difference in this game is the Ravens have the firepower to outscore the Titans.

The Ravens should be able to pull away and have the defense to make the Titans one dimensional. And when that one dimension is running the ball, it’s hard to make a comeback. While I expect the Titans to keep this game under 10 points, I don’t see how they come away with a victory. So, for that reason, we’re going to play on the Ravens and bring the spread down to under a field goal.

The Houston Texans are a below-average team. They have an excellent quarterback to go along with a truly elite #1 wide receiver. But their offensive line is among the 10 worst in the league, and they have a below-average defense.

The formula for beating the Texans offense is simple: get after Deshaun Watson. The Chiefs should be more than capable of doing that. On the defensive line, the Chiefs ranked 10th in adjusted sack rate. For comparison, the Bills ranked worse at #13.

On defense, the Chiefs rank 14th in overall efficiency and are 6th against the pass. Given that the Texans’ greatest strength is through the air, this matchup greatly favors Kansas City.

On the offensive side of the ball, we know how good KC is. But to drive the point home, the Chiefs were #3 in offensive efficiency during the regular season. And with extra time to prepare, Andy Reid is sure to have some tricks up his sleeve. So, good luck to Houston’s 26th ranked defense, which is 26th against the pass and 22nd against the run.

The Chiefs should be able to win by double digits. But just as the Bills found out with their 16-0 lead last week, you can never count out Deshaun Watson. So, we’re going to take the safe route here and take the Chiefs as the final leg of our NFL Divisional Weekend Teaser.