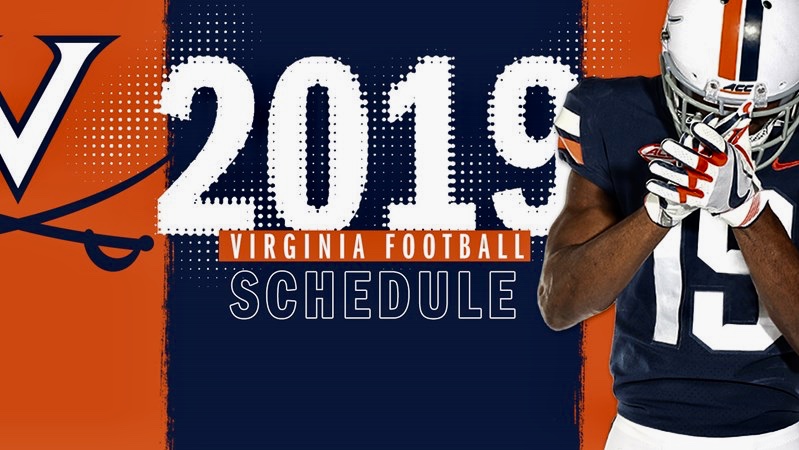 For win totals in the 2019 season in college football, Virginia Cavaliers stand out as a play on the OVER. It sits at 7.5 -150 to the over at most books or you may find over 8 +120.  I think either price is worth a look and offer value.  I have this 2019 Cav’s team winning between 8-10 games.  Let’s take a look at their schedule below.

Week one Virginia is a -2.5 favorite on the road at Pittsburgh and this is a difficult game but a very winnable game early on.  The Panthers were absolutely horrible passing the ball last year and brought in new offensive coordinator Mark Whipple to improve the quarterback play.  Virginia ranked 16thagainst the pass last year nationally giving up only 183 yards a game and future NFL cornerback Bryce Hall is as tough a matchup as there gets in the secondary.  Whipple may improve Pitt’s offense long term, but I don’t think so this early on.  It’s a coin flip game but we have the slight edge with UVA tabbed as the favorite.  I listed below games that I consider highly winnable games.  Let’s take a look.

If we pencil in wins in those games that gets us to seven wins.  They will be favored in every one of those games and only two scare me.  Home versus Duke and on the road against North Carolina could give them trouble. Now let’s analyze the rest of the schedule and pencil in losses at Notre Dame and at Miami Florida.

Although I wouldn’t count UVA out just yet against a suspect Miami team with a new head coach and a freshman quarterback starting, but we’ll call both those games losses.  At this point were looking at a record of 8-2 or 7-3 with two games remaining considering the first game against Pitt is a toss-up and can go either way.  Let’s cover the last two games on the schedule that we haven’t discussed yet.

Week three Virginia host Florida State and this is a crucial game if the Cavs want to eclipse 8 wins.  The Seminoles should be improved in Willie Taggart’s second year and the hiring of Kendal Briles should improve the offense.  UVA will most likely be the favorite here as well and I’ll take Bronco Mendenhall all day versus Taggart.

Cavaliers Favored in Majority of Games

I only have the Cavs dogs in two games all year.  Both road games to the Fighting Irish and the Hurricanes of Miami.  Now let’s get to the final regular-season game of the year on November 29thagainst in-state rival Virginia Tech.  The Hokies have won 15-straight in the series, but I fully expect that to end this year.  Star quarterback and dual-threat Bryce Perkins and company will have this game circled after losing 31-34 in OT last year.

The Cav’s should be favored here as well barring any setbacks.  Mendenhall is in his fourth year in Charlottesville and has completely turned this program around.  Virginia has 13 starters back and a very strong defensive team returning (6 starters back) led by their NFL caliber cornerback Bryce Hall.  It’s not out of the question to expect the Cav’s to win the Coastal division and finally snap a 15-game losing streak against VA Tech. This looks like a 10-win football team to me or 9-3 and if they do slip up in a game which is likely an 8-4 mark is possible.  Take over 7.5 or 8 wins on the Cavaliers win total.

For more sports betting picks, head over to our Free Picks page.