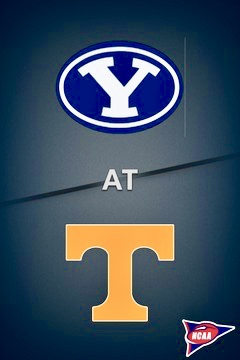 For this week’s college football free pick, we’re heading to Tennessee. Last week the Volunteers lost outright to the Georgia State Panthers as a 25-point home favorite in Knoxville.  It was one of the darkest days in program history, but I’m betting head coach Jeremy Pruitt will have his squad ready to play come game day this time around.

A lot of negativity surrounds this team as two players left the program earlier in the week (non-starters) and the home crowd was openly booing during last weeks game. If I were a player or coach in this situation, I would like nothing more than to get the bad taste out of my mouth and play a game as soon as possible.  The Vol’s can have their redemption come Saturday night as they face a BYU team coming off a loss in their opener to rival Utah. My ratings have Tennessee 1.5 points better than BYU and after you factor in home field advantage (4.5 points) I make the game -6.

The Vol’s should be motivated to say the least and if they come up empty again Jeremy Pruitt will all but nailed the coffin shut on his tenure in Knoxville. I am a bit concerned about BYU quarterback Zach Wilson as he presents a tough matchup for the defense.  He can throw it well and he runs it even better. Defending the option was a problem against Georgia State as quarterback Dan Ellington rushed for 61 yards and a score. Rushing, in general, was a problem as they gave up 213 yards on 53 carries (4 yards per rush).

In hindsight, it wasn’t as bad as it looked.  The longest rush they gave up was a 22-yard TD scramble by Ellington where two defenders ran into each other resulting in the touchdown. They outgained Georgia State 404-352 in yardage.  They lost the turnover battle (-2) and that’s something the head coach knows they need to correct.

Pruitt Fighting for his Job

Pruitt said this after the defeat “We’ve got to be that team that doesn’t beat their self. We’ve got to quit beating ourselves before we can beat somebody else.”  This team doesn’t want to be embarrassed again and I expect a good effort considering the situation. You have to be willing to bet on the teams that offer value and those teams are usually not the pretty pick of the week.  Tennessee fits the bill in this scenario and I’m laying the points with this ugly darling because that’s where the value lies.

For more sports betting information, head over to our Betting Basics page.