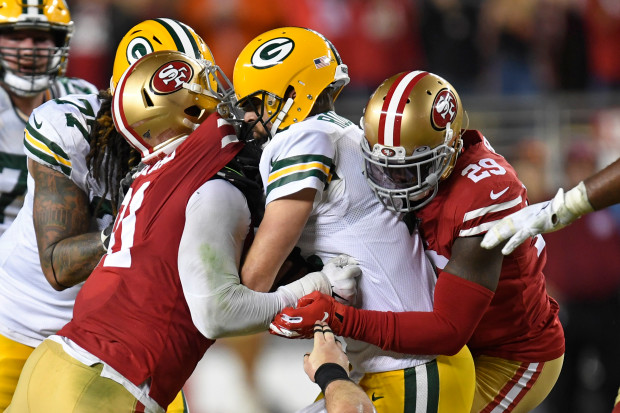 As soon as the lines were released for this weekend, I locked in this Championship Sunday teaser. It almost seems too good to be true. And of course, when betting on sports, nothing is guaranteed. In fact, if your win percentage on bets is in the upper 50’s you’re among the better handicappers out there. But I believe this bet has a much higher probability of hitting than 60-percent, so let’s get to it.

This line is just begging to be teased down. The Green Bay Packers and the Seattle Seahawks just played in the Fraud Bowl. Both the Seahawks and the Packers entered the game with negative 0.2 net yards per play on the season. Neither team deserved their gaudy record, and both were lucky to be playing on divisional weekend given their average underlying numbers. But someone had to win, and the Packers barely escaped with a victory despite holding two separate 18-point leads.

So how are the Packers going to go into San Francisco and come away with a victory? The 49ers bludgeoned the Packers in week 12, and while we shouldn’t expect the same result, it’s been proven that this is an awful matchup for Green Bay. San Francisco does not need to blitz to put pressure on the quarterback, and their pass defense is #2 in the league. The 49ers defensive line is #2 in the league in adjusted sack rate, and the Packers may be without starting RT Brian Bulaga. Aaron Rodgers is not going to have time to sit back and wait for Davante Adams to get open.

The 49ers come into this game with the #2 overall defense per DVOA. The Seahawks, for comparison, were ranked #18 on the season. And yet, the Packers still were not able to outgain Seattle on Sunday, losing the yardage battle 344 to 375. The 49ers also bring the 7th ranked offense into this game to match up with the Packers 15th ranked defense. San Francisco is simply in a different weight class than Green Bay, and the disparity will be on display Sunday.

The Tennessee Titans have quickly become the darlings of the NFL. A week after knocking off New England, the Titans pulled off the improbable, embarrassing the Ravens en route to a 28-12 victory. The reason fans love the Titans so much right now beyond being an upset machine is the way they get the job done. Right now Tennessee represents old school football. The way football looked when you see highlights of NFL Films from the ’70s. The main reason for that, of course, is Derrick Henry.

It’s impossibly fun watching Henry run the ball. He looks like a Madden character that you made 25% bigger than every other player and gave him 99 stats across the board. And I believe the public perception on Tennesse has caused this number to be a little short. In fact, it’s already moved from -7.5 to -7. Can the Titans beat the Chiefs on Sunday? Sure, but I think the Chiefs win this game at least 7 times out of 10.

Similar to San Francisco, the Chiefs are on another level

The greatness of Andy Reid and this Chiefs offense was on full display Sunday. Down 24-0 the Chiefs scored three touchdowns in three minutes and 24 seconds. And just like that, you knew the game was over. The crazy part about the game is that you probably weren’t too surprised by the Chiefs’ offensive outburst. Kansas City is simply too talented, too fast, and too well-coached on offense. An elite defense might be able to slow down this Chiefs freight train, but not the 16th ranked Titans defense.

And yes, you could have said something similar about the Titans vs. Ravens. However, that result was the outlier, and not what you would expect if those two teams were to play again. The Ravens had three turnovers to Tennessee’s zero. That number also increases to seven turnovers if you count going 0-4 on fourth down. The Titans victory was well-earned, but I do not believe it was a precursor to what will happen this Sunday.