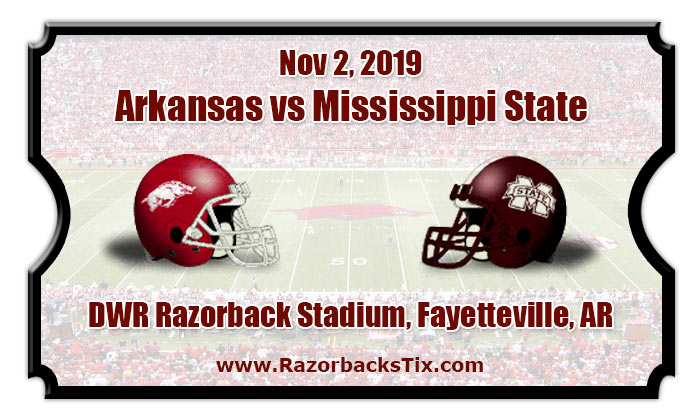 This week’s NCAAF free pick comes out of the SEC as Mississippi State (3-5) heads on the road to take on Arkansas (2-6). The line at most sportsbooks currently has Mississippi State as 7.5-point favorites. Both teams are on losings streaks of at least four weeks with neither mounting a win since about mid-September.

Arkansas heads into this game having lost its last five contests. It all started with a bad loss to a now 4-4 San Jose State team 31-24. Their next four opponents were significantly tougher as they had to battle Texas A&M, Kentucky, Auburn, and Alabama. Having just gone through one of the toughest four-game stretches in the country, the Razorbacks will now be playing their easiest opponent since that disappointing loss to San Jose State.

Mississippi State started the season 2-0 after defeating inferior opponents in Louisiana-Lafayette and Southern Miss. A loss to Kansas State in Week 3 ended their undefeated season rather quickly and they then rebounded with a win over a solid Kentucky team. Their last four games have been one of the few stretches that can rival the difficulties of Arkansas’. The Bulldogs lost to Auburn, Tennessee, LSU, and Texas A&M over their last four contests. Like Arkansas, this too will be their easiest contest in over a month.

Taking a look at these two teams you’ll notice some similarities. Arkansas and Mississippi State are ranked 93rd and 92nd respectively in points scored this season. The Razorbacks are the more pass-heavy team (54th compared to 107th for Mississippi State) while the Bulldogs are the more run-happy team (50th to 97th for Arkansas). On the defensive side, these two teams aren’t too far apart either. State has a slight advantage in points allowed, ranking 76th compared to 93rd for Arkansas. Like their offenses, Arkansas is better with the pass (61st to 87th) while Mississippi State is better with the rush (64th to 100th).

These two teams have each had their ups and downs in the SEC over the years. In their last 10 meetings between each other, the Bulldogs have won six of those contests but Arkansas is 6-4 ATS in that span. The stats are also very similar in those last 10 meetings as both teams average about two turnovers per game, 30 pass attempts, 64% completion, and 255 passing yards.

These two teams are about as similar as it can get in terms of production and talent. Arkansas being the passing team can play from behind a lot better than the Bulldogs. If Arkansas can jump out to an early lead that will make this game a lot more difficult for the Bulldogs as they rely heavily on the run. The spread being above such a key number like 7 points is another reason this pick is so great. Run with the underdog Razorbacks at home in this contest.