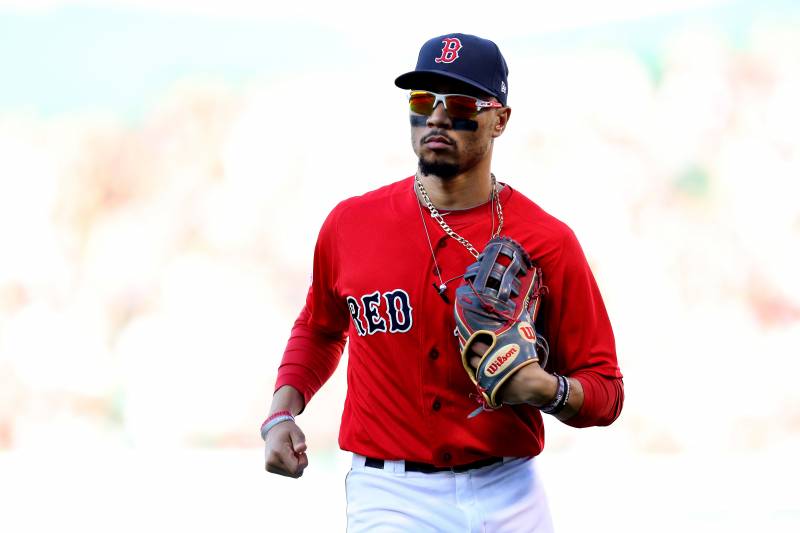 When Boston traded away Mookie Betts and David Price, it was a signal that they’re not trying to compete in 2020. The baseball world rightfully viewed the move as waving the white flag as the Evil Empire of the New York Yankees returned to center stage after signing super ace Gerrit Cole. Having gone over the luxury tax multiple times and facing ever-increasing fines, the Red Sox decided it was time to take a step back and reset their finances. Boston received two potential impact MLB players in outfielder Alex Verdugo and infielder Jeter Downs, but they clearly downgraded significantly overall. However, after a disappointing season and a white flag trade, has the Red Sox win total dropped too low at 83.5 games?

A season ago the Red Sox won 84 games. While Xander Bogaerts and Rafael Devers had career years, along with Betts having another superstar caliber season, plenty went wrong for the Red Sox in 2019. Andrew Benintendi took a big step backward in his progression, and Chris Sale was injured or ineffective for large stretches during the season.

The Red Sox also underperformed their expected win total, 87, by three games. While Boston’s offense is still potent enough to carry them to the postseason, the starting rotation has turned into a giant question mark.

Eduardo Rodriguez had somewhat of a breakout season in 2019, as he finally started to turn some of his projection into production. But there’s no guarantee he continues to pitch as well in 2020 as his xFIP (4.10) and SIERA (4.31) were both significantly higher than his ERA.

The positives for Rodriguez include throwing an impressive 203.1 innings with a 3.81 ERA last year along with a 3.86 FIP. He also traded fly balls for ground balls, which benefited him greatly in a season that featured a juiced ball. Rodriguez’s GB/FB rate drastically increased from 0.94 to 1.49 in 2019, and his continued success may depend on him keeping the increased ground ball rate intact.

As it stands right now, Rodriguez will be the Red Sox opening day starter with Chris Sale expected to open the season on the 15-day DL. Sale’s spring training has been delayed by a bout with pneumonia which has delayed his timeline. Sale was limited last year to 147.1 innings, and the results were the worst of his career with a 4.40 ERA. His peripherals remained elite, however, and it would not be surprising to see him return to an ace with a full healthy season in 2020.

Behind Rodriguez, the only experienced options are Nate Eovaldi and Martin Perez. Neither pitcher has proven to be overly effective as a starter and both have serious downside. Eovaldi is coming off a 5.99 ERA in 67.2 innings last year, while Perez’s ERA has ranged between 4.39 and 6.22 the past five seasons.

For the Red Sox to be competitive this season, they’ll need their lineup to carry them. And with the firepower they still have on offense, that is not out of the realm of possibilities. Even without Mookie Betts, the Red Sox lineup is one that no pitcher looks forward to facing. Here’s what it could look like to open the season:

The first step towards Boston overcoming the loss of Betts is Andrew Benintendi’s continued progression. Former top-10 draft pick and #1 overall prospect in baseball, Benintendi looked to have had his breakout season in 2008 posting a 122 wRC+ as a 23-year-old, but 2019 turned into somewhat of a disaster.

Is Andrew Beninentendi a Sleeper?

After holding steady from 2017 to 2018, Benintendi’s walk rate dropped from 10.7% to 9.6% while the strikeouts went from 16% to 22.8% in 2019. His isolated power remained relatively the same at close to league average, and he had continued success on the basepaths. But his weighted runs created plus went down to 100, exactly league average.

With his pedigree and young age, we should expect Benintendi to bounce back close to 2018 levels, which would make him a productive leadoff man in front of Rafael Devers and Xander Bogaerts. Both Devers and Bogaerts had superstar level seasons in 2019. While some regression could be in order, Devers is only 23 years old and Bogaerts is in his prime at 27. We should expect similar all-star level seasons from both in 2020.

Behind Bogaerts and Devers, J.D. Martinez remains one of the most feared hitters in the game. His wRC+ of 139 edged out Devers and was just under Bogaerts at 141. Combined, the three sluggers are among the best trios of players in MLB. But after Martinez, the lineup drops down a few tiers.

Mitch Moreland ranges from average to slightly above average on offense. Michael Chavis has promise as a power hitter but strikes out way too much to be an impact player. Jackie Bradley plays great defense but gives it back on offense. Christian Vazquez had a breakout offensive season in 2019 so it will be interesting to see if he can back it up, his statcast numbers don’t suggest that he will.

Rounding out the lineup is Alex Verdugo who could potentially hit atop the order. Verdugo is above average defensively and has a strong hit tool to go along with a

Journeyman outfielder Kevin Pillar was signed after the Mookie Betts trade and will add depth. Pillar is basically the same player as Jackie Bradley Jr., decidedly above average on defense but he gives it back on offense, resulting in a 1.5 WAR type of player. A far cry from the 7.08 WAR that Mookie Betts averaged over the past five years.

The Red Sox win total ranges between 83.5 and 84.5 wins depending on where you look. For comparison, PECOTA has projected Boston for 84.5 wins, half a win more than they won a season ago. As I mentioned above, Boston underperformed their expected win total last year which was 87 wins. But even if 87 wins was their true talent level in 2019, shouldn’t we expect that the loss of a superstar in Mookie Betts should be worth more than four wins?

Handicapping the loss of David Price to the Dodgers and Alex Verdugo joining the Red Sox can be viewed as a wash. If you look at what those players did a season ago and what we’d expect them to do in 2020, the impact could be similar, but the tiebreaker would go to the established David Price.

With a below-average bullpen and a myriad of questions in the rotation, it’s difficult to see this Boston team winning 85+ games and staying in contention this season. After decidedly waiving the white flag with the Mookie Betts trade, we shouldn’t expect the Red Sox to be aggressive in adding replacements during the season.

The kicker is Chris Sale. He was not very good last year, but the Red Sox were still able to win 84 games. If he returns to form, it’s going to mean at minimum a few more wins for Boston.

The Pick: Add it all up, and I do not see any value in betting either the OVER or the UNDER on the Red Sox win total.