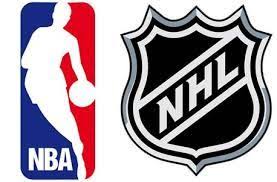 It’s Easter Sunday and we have been without major sports for a month now. The two major sporting leagues that were suspended, the NBA and NHL, both have about a dozen or so games left in their regular seasons before heading into playoffs. After a somewhat promising expectation, when this pandemic first started, that these sports leagues would be back up and running by June or July, it is now clear that there is no real timeline to bank on. But that doesn’t mean we can’t still handicap the NBA finals or NHL Stanley Cup bets.

Reports across the sporting world haven’t gotten any better in recent weeks. Some Asian sports leagues that were supposed to return have been postponed even longer. The UFC recently suspended events indefinitely and other leagues that were expecting to come back sooner than later are starting to realize that it is unlikely. Still, we hold out hope that the 2019-2020 NBA and NHL seasons will somehow find a way to complete themselves, even if it is by some form of altered playoff scenario.

Assuming these leagues do find some way to commence, who are the teams to be betting on to win it all?

James is playing at an MVP-level just like Antetokounmpo and many expect those two to be the deciding factor if these two teams do end up playing each other in the Finals. However, I think it will come down more to players behind each team’s leader.

Davis for the Lakers and Khris Middleton for the Bucks would be two x-factors in this series. I give the edge to the Lakers here. I also think L.A. has the advantage as the rosters go deeper. Both teams no doubt are the two most talented teams in the NBA and if this series were to play it would be an instant classic. Hopefully for our sake, we aren’t robbed of this potential matchup because of this pandemic. However, I give the edge to the Lakers with the experience of James, talent of Davis and depth of their roster.

The Dallas Mavericks are the best team outside of the big three (Lakers, Bucks, Clippers) in my opinion. They have as good a chance as any team to dethrone any and all of those big three teams. For it to happen, it would take a near perfect series from the Mavericks and a little luck but it could certainly happen.

Luka Doncic is one of the best all-around players in the NBA. He’s not just a scorer but he can rebound and also create excellent scoring opportunities for teammates. Having Kristaps Porzingis as his second in command is a huge assest as well. These two alone are enough to give any team trouble.

Aside from their “big two”, the Mavericks have plenty of talent as you go down the roster. Tim Hardaway Jr. and Seth Curry are two players who could play a big role for the Mavericks in the playoffs. Both players are capable of having big scoring nights and helping take some focus off of Doncic and Porzingis. Other supporting cast members such as Willie Cauley-Stein, Dwight Powell, Boban Marjonavic and Delon Wright are all talented enough to put up big minutes come playoff time.

Full Disclaimer: I am an Avalanche Fan

Having said that, taking “biasedness” out of it, I do believe the Avalanche is an excellent pick to win it all this year, especially given that 8.5/1 payout. The Avs are the third favorites on FanDuel behind the Bruins +600 and the Lightning+700 (both in the Eastern Conference). Therefore, FanDuel has the Avs as the best in the Western Conference and I agree.

Colorado has two excellent goalies in Philipp Grubauer (who should be back from injury if/when the NHL resumes) and Pavel Francouz. This is a huge advantage come playoff time as Grubauer will not need to be forced in to net every game. Francouz showing his talent in Grubauer’s absence is a huge boost for this Avalanche team.

Staying on the defensive side of the puck, the Avalanche has an excellent mix of experience and young talent. Cale Makar is perhaps the best young defender in the NHL. Another you player in Nikita Zadorov provides a big body at 6’6″ 235 to help act as the enforcer type. Add in the experience of Ian Cole (2x Stanley Cup Winner) and Erik Johnson and this Avs defense has all the pieces you want come playoff time.

On the offense end, Colorado has arguably one of the best players in the NHL in Nathan MacKinnon. Mikko Rantanen, Nazem Kadri, Gabriel Landeskog, Andre Burakovsky and a number of other talented players make this Colorado team both talented and deep. This current hiatus should favor the younger players as opposed to some of the older players in the league. The Avalanche are also one of the youngest in the league.

The Edmonton Oilers were fourth in the Western Conference when the season was put on hold. They also had the league’s two highest point scorers in Leon Draisaitl (110) and Connor McDavid (97). McDavid is considered the best player in the league right now and deservedly so. He alone is a reason why this pick is worth a shot at 20/1.

The Oilers are the best team in the league when playing with a man advantage and second-best when at a disadvantage. Both are crucial aspects of playoff hockey. They have the best player in the league and also the league’s top scorer in Draisaitl. They may not be the deepest team and they certainly have flaws but the Oilers are a team that has some championship DNA and could be a tough out come playoff time.